Recent evidence has shown that contrary to common belief, grass is not the biggest cause of laminitis in the UK. 90% of cases are caused by an underlying hormonal disorder.

Grass can be a trigger factor for the onset of laminitis in horses and ponies suffering from a hormonal disorder but it is unlikely to be the sole cause. This explains why some animals can graze lush pasture with no problems and others are likely to succumb to laminitis.

The 2 most common hormonal disorders encountered are:

Both disorders are diagnosed on a combination of the presence of clinical signs, X-rays and blood samples taken to measure the levels of hormones present in the blood. 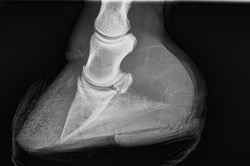 There is a licensed medicine available for the treatment of Cushing’s disease which acts to regulate the amount of Cortisol produced by the body. This is not a ‘cure’ and horses and ponies suffering from Cushing’s disease require lifelong treatment. It can take up to 12 weeks from the start of treatment for the level of Cortisol to stabilise and the horse to return to ‘normal’.

Treatment of EMS requires careful management and this is targeted at 2 areas:

Other less common causes of laminitis include:

For further information on laminitis and underlying hormonal disorders please go to http://www.talkaboutlaminitis.co.uk/